Title: The Story of Islam

The story of Islam began with an ordinary man, an Arabian called Muhammad. In year 610, on a mountain close to Mecca, Muhammad sat alone in a cave when, out of nowhere, a voice spoke to him. The voice told him he was a messenger of God, an angel. Through that angel and some visions, he received revelations directing him to start a new religion, Islam. Muhammad spread the doctrines of this religion by word of mouth and with the use of animal skins but it wasn’t well received by Meccans. Muslims were persecuted for about 20 years until they took over Mecca after a war in year 630. Muhammad died two years later in year 632 but that was only the beginning of the religion. Over the next ten centuries, Muhammad’s Muslim army grew under the care of several successors (caliphs) and conquered several nations around Arabia, Christian and pagan alike, converting many to Islam. However, there was trouble in paradise. The Muslims had split into two groups, the Sunni Muslims and the Shi’ites.

Read this book to learn about these groups, the Abbasids, a group of Shi’ite Muslims who brought a period of great wealth, knowledge of the arts and sciences and culture to the world and the magnificent city of Baghdad; the Ottomans, arguably the greatest Muslims that ever lived; the Taj Mahal, the resting place of the Mughal empress, Shah Jahan, and the Crusades, the centuries-long war between Christians and Muslims over the holy city of Jerusalem.

UP: This book gives a brief but information-packed history of Islam with pictures, maps and illustrations and the most vivid words, I have read in a book in a very long time.  I have read it twice already. It’s a little slice of world history. I recommend for parents and children alike especially for lovers of history.

CHALLENGE: The Story of Islam

Entry requirements: Entrants must be within the 8-12 age range. The first correct entry will be announced on this page and will win a copy of this book. Answers must be submitted before 12:00am on Sunday, February 5th 2017.

THE LAST DAYS AT FORCADOS HIGH SCHOOL by A. H. Mohammed 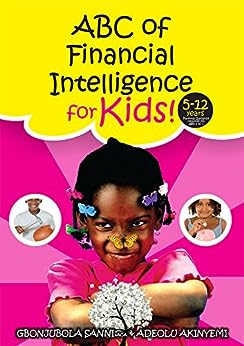 This book introduces readers to the joys, dos and don’ts of financial freedom. First off, it defines terms like currency and money and gives a short expo on the history of money. Then it moves on to the concept of financial freedom and how to make and manage money as well as the creation of goals/visions for the future. It also introduces kids to different formulae for distributing income. The method given here involves dividing up income into six jars. The God Jar (10%), The Play Jar (10%), The Project Jar (10%), The Education Jar (10%), the Freedom Jar (10%) and the Necessity Jar (50%). Does your child know that having a single source of income is dated? According to the authors, to maintain a good standard of living and eventually gain financial freedom, one needs to have at least 2-3 sources of income. Does your child know that he/she can start earning income NOW? Today? In today’s Nigeria, this book is a must-read for every child and some adults. tongue in cheek

UP: This book is a treasury of tips on financial management for kids. Replete with information on making and managing money, it also teaches readers how to set SMART goals, discover their gifts, strengths, weaknesses and passions. One of the highlights for me is the Vision Board, here described as a board containing images (photos, newspaper and magazine cut-outs, etc.), tokens, and all things related to a person’s vision, goals, dream (who you want to become, what you want to do or what you want to have). Every child needs a Vision Board and a map leading to the Board. I recommend this book for every child.

DOWN: There are quite a few typos, some grammatical errors as well as the use of ‘Nigerian’ English. 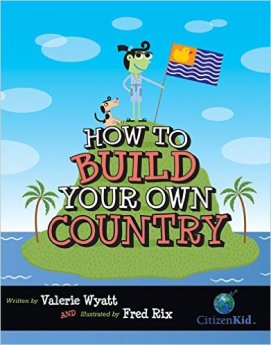 Title: How to Build Your Own Country

Valerie Wyatt says building your own country is easy-peasy, as easy as 1 -2 – 3! All you have to do: 1. Stake your identity by creating your country’s flag, money and national anthem; 2. Run your country by holding elections, forming governments and making laws, etc., and 3. meet your neighbours and join organizations.

But is it really that easy? How will you find a population for your country, hold elections, make laws, create your own money and national anthem, write a constitution, etc.?

Read the book to find out!

UP: Humour. This is edutainment at its best. It is truly an excellent ‘How To’ guide for building a country especially for kids. It is packed with information on how to make laws, write a constitution, create passports, money, flags, etc. It also has a template for creating a national anthem. It is also filled with fun facts such as funny laws made in the world, the largest, smallest, poorest and richest countries in the world, etc.  A valuable reference tool for teachers and parents on the subject of civic education.

Replete with fun filled projects, it is the perfect book to keep your kids (boys and girls alike) busy for an entire weekend at the very least.

The illustrations are fantastic! They add to the general quirkiness of the book.

DOWN:  None. Warning! There is an image of a decapitated head of state.

CHALLENGE: How to Build Your Own Country

Create samples of your Passport, Money, Flag and National Anthem (plus tune) 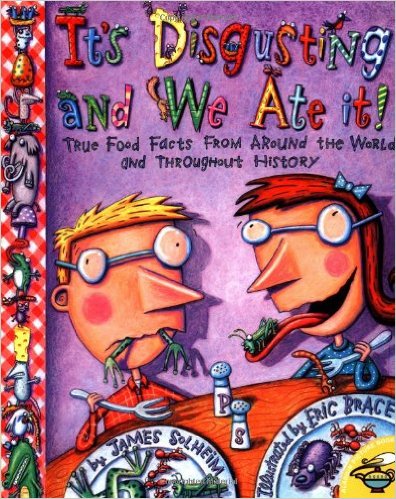 Title: It’s Disgusting and We ate it!

What would you rather eat for lunch? A steaming piece of pizza, a bowl of bugs, a live oyster or a fish’s head? You might be surprised to learn that many people in the world will not answer ‘PIZZA”.

This book features the silliest, strangest, sickest meals the world has ever known from frog legs in China, to roasted giant spiders, raw long white earthworms dug from rotten logs in Australia, raw fish, raw squid and seaweed sushi in Japan to minced rattle snake meat made in the US. Divided into three parts, it looks at exotic foods around the world today (like earthworm soup eaten by the Chinese); exotic dishes in history (rat stew eaten by sailors) and a rather scary behind the scenes look at the contents of the food items in our fridge today! (Like the bacteria and fungi that make up cheese and mushrooms).

I distinctly remember eating roasted crickets (abuzu) and fried termites (aku) as a child. While I thought they were delicious, the average American kid would probably throw up while watching me eat them, esp. during the rather noisy sucking of the delicious, soft, white, juicy liquid in the aku’s stomach.

The ‘delicacies’ in this book give a whole new meaning to the line “One man’s meat is another man’s poison”!

UP: Everything!! It’s a well-researched, beautifully illustrated book that entertains while educating. It has lots of facts delivered in the most interesting way possible!

For example, did you know that roasted giant spiders are a greater source of protein than beef? One ton of beef has 394 pounds of protein whereas one ton of spiders has 1268 pounds of protein! Did you also know that the world’s costliest spice comes from flowers? A pound of this spice, Saffron, used to make rice, etc., costs up to $4,000 (Over N1m!)

The dishes made of reptiles like snakes, insects like termites, crickets and grasshoppers and other animals like fishes, spiders, earthworms, even flowers will keep you either horrifically horrified or smacking your lips!

The book also features a bibliography at the end for kids who want to do some more digging on true food facts around the world! A must have in any curious mind’s library!

For some truly disgusting recipes from around the world: http://www.jamessolheim.com/worlds-weirdest-recipes.html#.VoKIkbT6La4

CHALLENGE: It’s Disgusting and We ate it!

Entry requirements: Entrants must be within the 6-12 age range. The first correct entry will be announced on this page and will win a copy of this book. 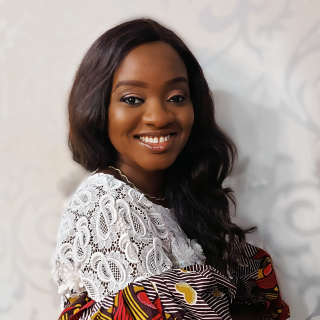